Bitcoin miners are finding it extremely hard to continue their operation as the cost of production has exceeded the profit. 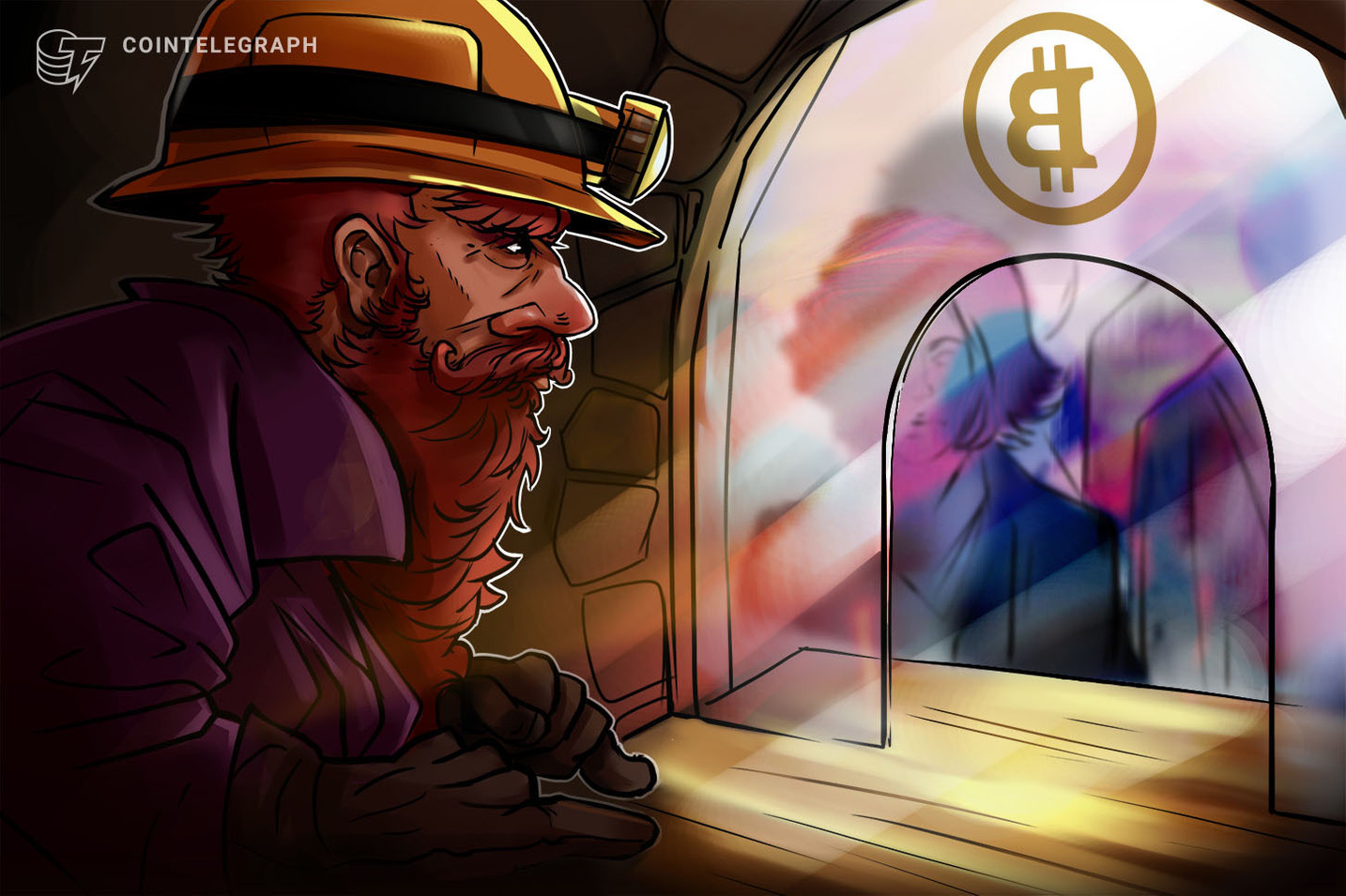 The cryptocurrency market entered a sell-off phase in the first week of June, seeing a market-wide route with the majority of cryptocurrencies falling to a 4-year low.

New data from Arcane research shows that public Bitcoin mining firms sold 100% of their BTC production in May compared to the usual 20-40% earlier.

In the first four months of 2022, public BTC mining firms sold 30% of their mined production, which increased 3X folds in May and is expected to rise even further in June. 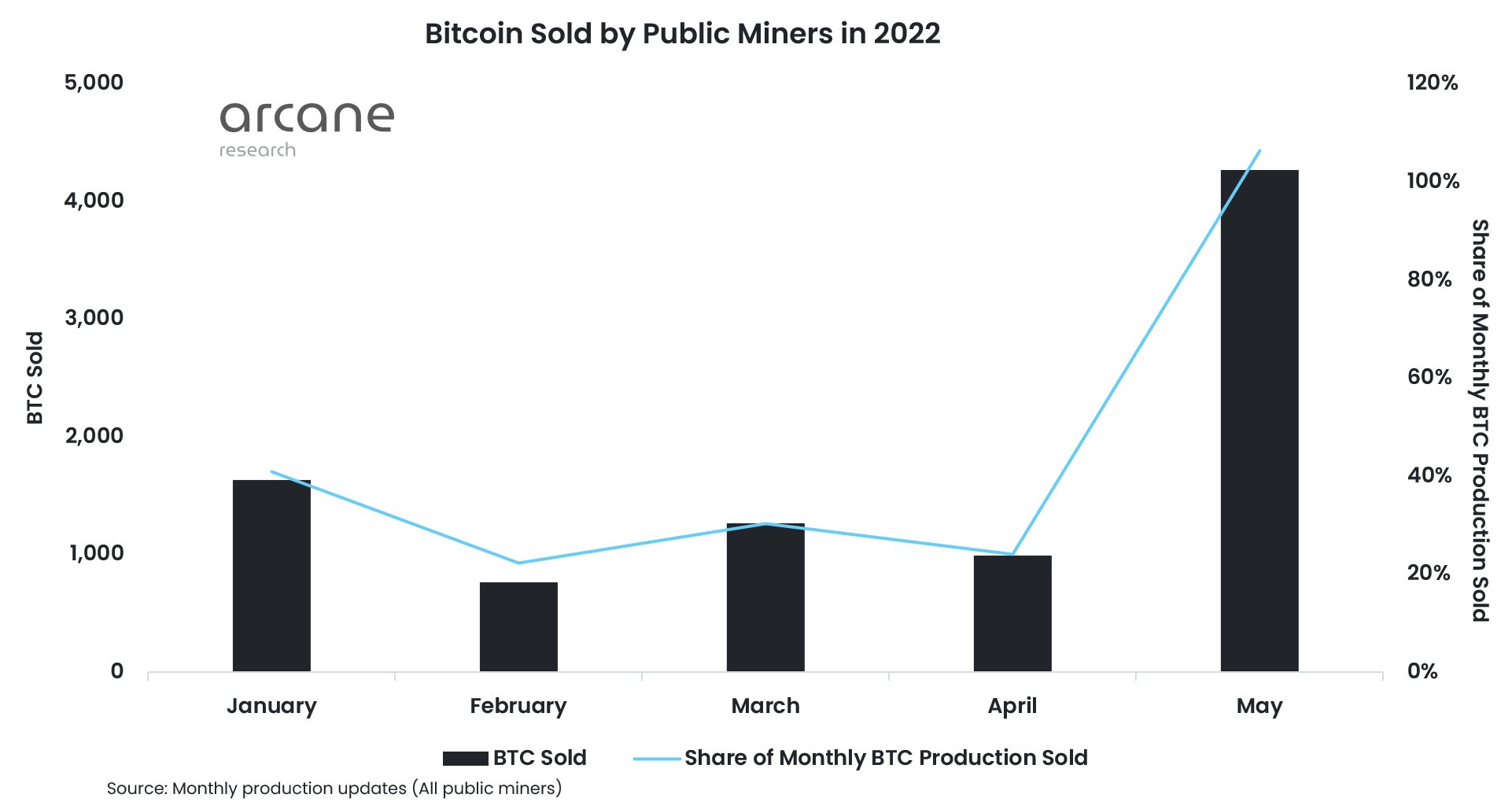 While public BTC miners only make up to 20% of the total network hashrate, their behavior often reflects the sentiments of private miners as well.

Miners collectively hold 800,000 BTC, making them one of the biggest whales in the market. Out of these, public miners hold 46,000 BTC and their selling spree could push the price further down.

The condition has only worsened in June with the Bitcoin price falling below the 2017 high of $20,000 and recording a new 4-year low of $17,783. Miner’s to exchange flow, a data metric that shows the volume of BTC sent by miners onto exchanges has reached a new high in June, reaching a level not seen since January 2021.

As Cointelegraph reported earlier, BTC miner’s to exchange flow ratio has hit a new 7-month high when BTC price tanked below $21,000. The decline in the price of BTC has also made many mining machines unprofitable, forcing miners to leave the crypto market. 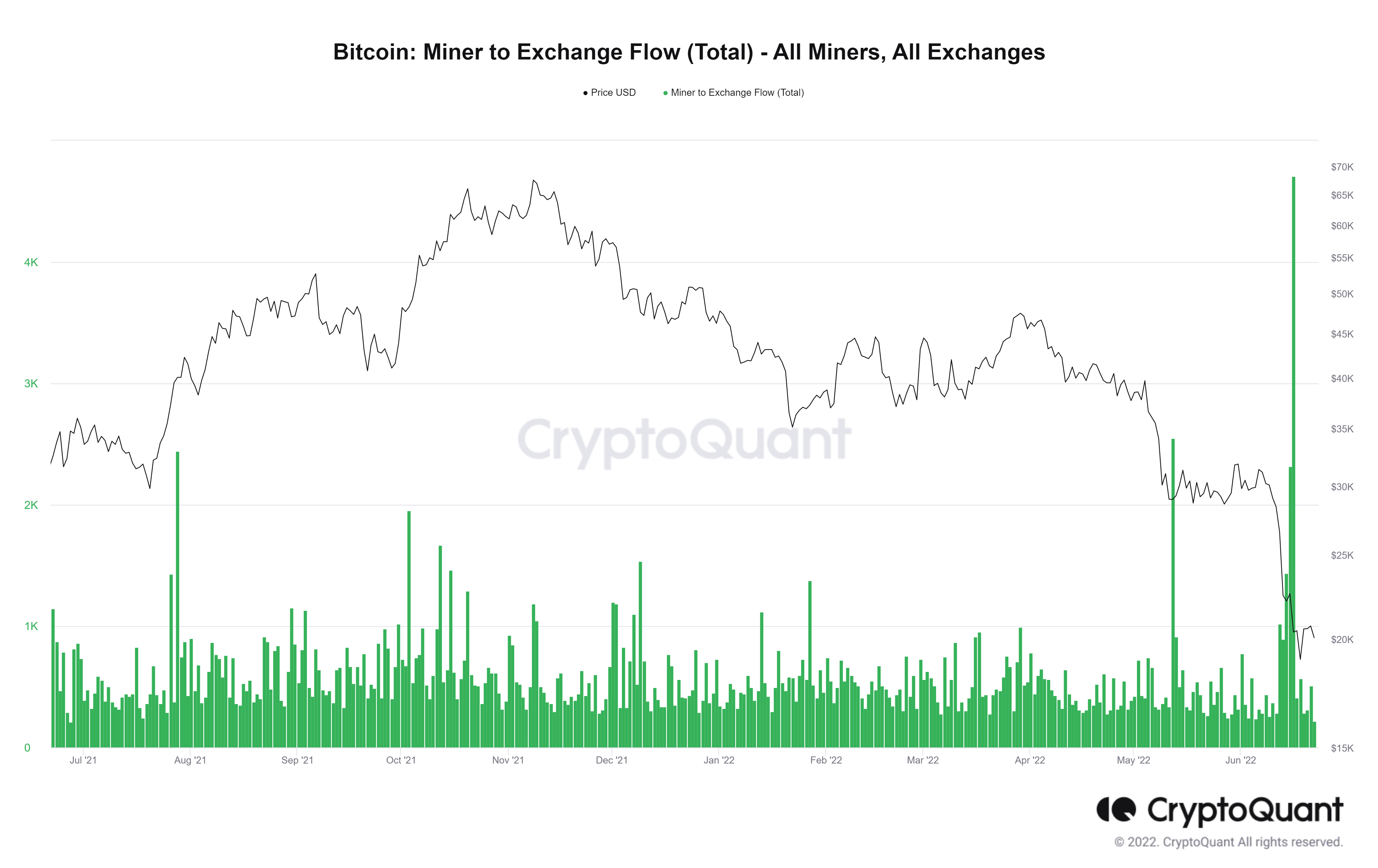 Bitcoin hash price is a mining metric that represents the miner revenue on a per terahash basis. It is the average value — in fiat currency — of the daily rewards a miner gets per each terahash calculation (USD/TH/s per day), which has fallen to a new 1.5-year low. 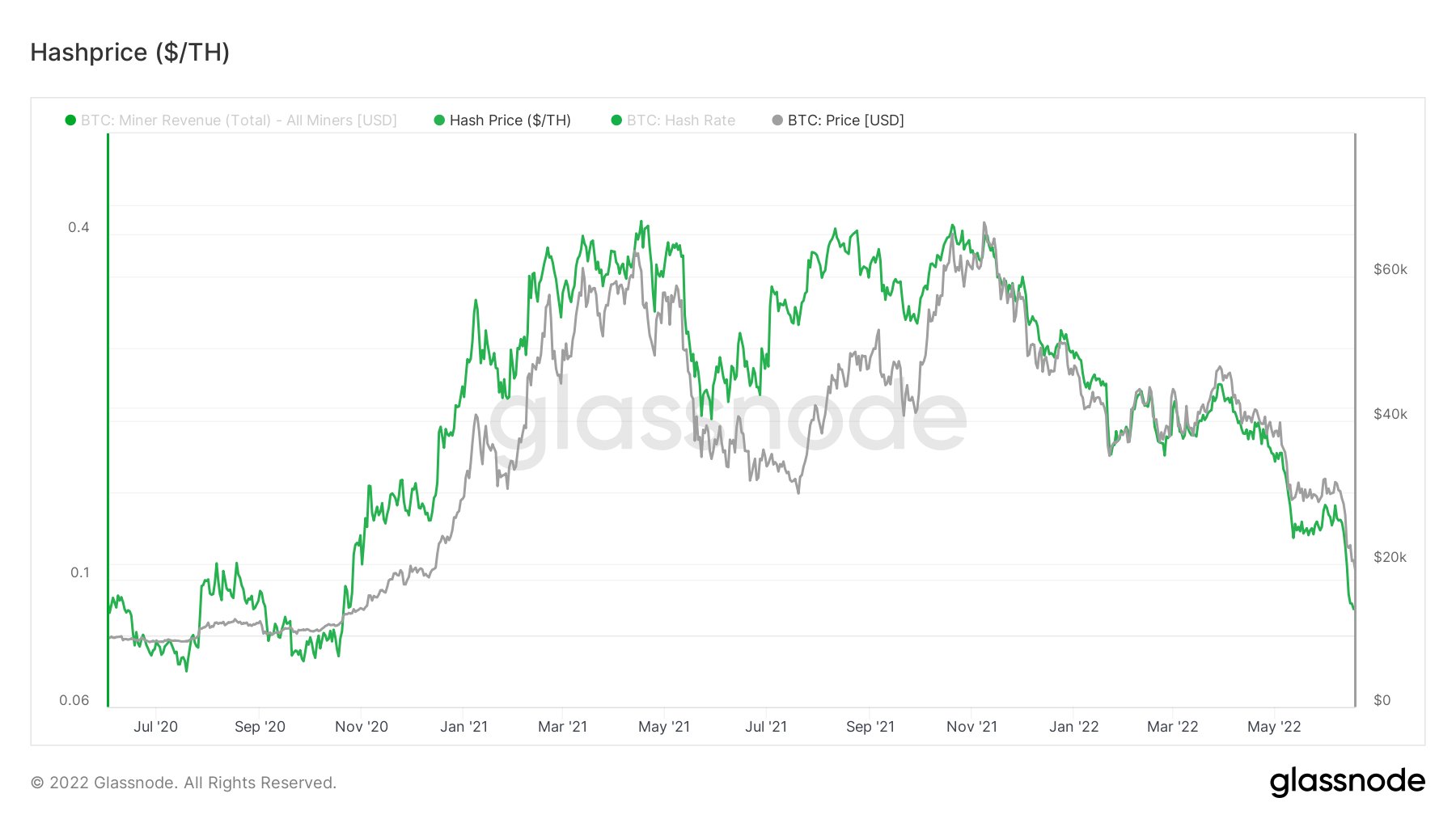 Bitcoin Hash Ribbon, an indicator that tries to identify periods where BTC miners are in distress and may be capitulating, has crossed, indicating many miners are unplugging their machines due to lack of profitability. 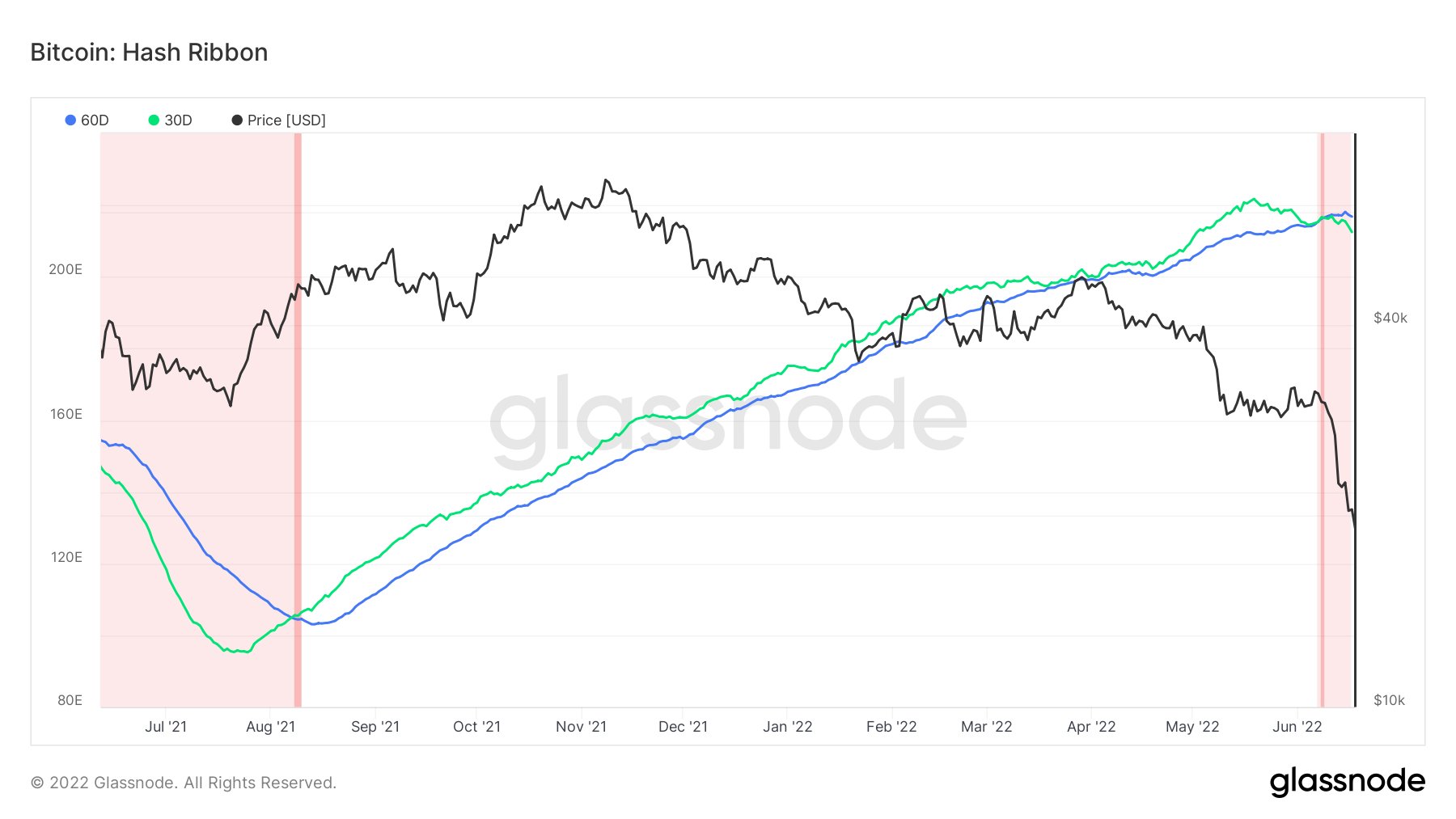 At a time of BTC price decline and miner crisis, many believe it is a strong price bottom signal as well, especially when miners start giving up.

This distress signal occurred 9 days ago, possibly indicating that the price bottom is near!

“When miners give up, it is possibly the most powerful Bitcoin buy signal ever” -@caprioleio #BTC #Cryptocrash #cryptocurrency pic.twitter.com/SWJjzUEICB